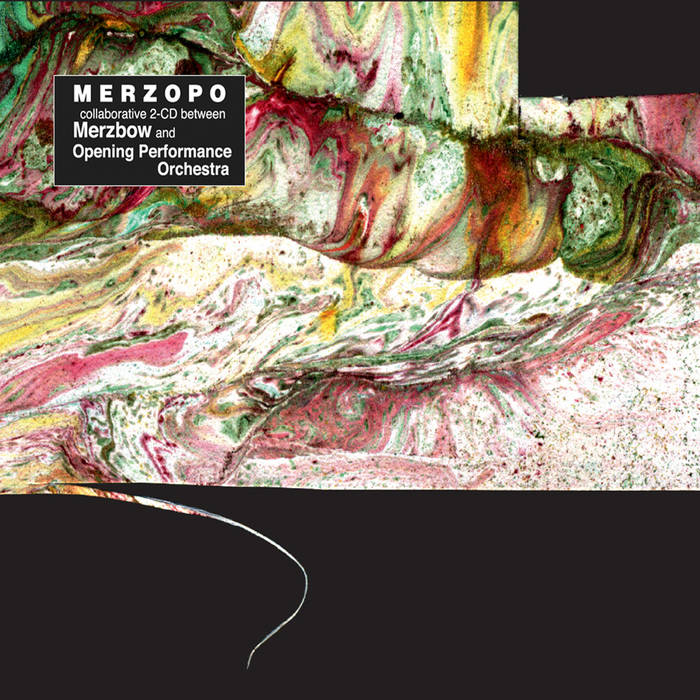 MERZOPO is a collaborative 2-CD album of a Japan noise legend Masami Akita alias Merzbow and a Czech seven-member ensemble Opening Performance Orchestra based in Prague.
The first CD contains four compositions by Merzbow. 'Futaomote' means 'double face' and it was originally titled 'Janus'. 'Yasugibushi' is a Japanese old folk song which was sampled. The second CD contains two live tracks from Opening Performance Orchestra which were played live in Tokyo and Prague in 2017 and studio edited at the end of 2017 and the beginning of 2018.

Merzbow is a Vegan Straight Edge Noise Project of Masami Akita
who Born lives and works in Tokyo, Japan. In late 70s, he gradually
withdrew himself from the rock scene and began experimenting in his basement with broken tape recorders and feedback and founded own Noise music and Started a project "Merzbow" in 1981.
Merzbow began as the duo of Masami Akita and Kiyoshi Mizutani, who met Akita in high school. Akita started releasing noise recordings on cassettes through his own record label, Lowest Music & Arts, which was founded in order to trade cassette tapes with other underground artists. In 1984, he founded a second record label called ZSF Produkt.
During this era, Merzbow found much wider recognition and began making recordings for various international labels. He also started touring abroad with the help of various collaborators. Merzbow performed in the USSR in 1988, toured the USA in 1990, Korea in 1991, and Europe in 1989 and 1992. Kiyoshi Mizutani left Merzbow after the 1989 European tour and continues to pursue a solo career.
During the European tour in September–October 1989, Merzbow could only bring simple and portable gear; this led to the harsh noise style Merzbow became known for in the 90s. Recordings from the mid-1990s onwards are mostly of extreme volume, some mastered at levels far beyond standard.
Merzbow's sounds employ the use of distortion, feedback, and noises from synthesizers, machinery, and home-made noisemakers. While much of Merzbow's output is intensely harsh in character, Akita does occasionally make forays into ambient music. Contrary to most harsh noise music, Akita also occasionally uses elements of melody and rhythm.
During the 90s Akita's work became much harsher and were generally mastered at a louder volume than usual. These were heavily influenced
by death metal and grindcore bands of the time. In 1994, Akita acquired a vintage EMS synthesizer. From 1996, plans were made to release a "10 (or maybe 12)" CD box set on Extreme Records.

In 2000, Extreme Records released the 'Merzbox' a fifty CD set of Merzbow records, twenty of them not previously released. Since 1999, Akita has used computers in his recordings, having first acquired a Macintosh to work on art for the Merzbox. Also at this time he began referring to his home studio as "Bedroom, Tokyo". At live performances, Akita has produced noise music from either two laptop computers or combination of a laptop and analog synthesizers. Since 2001, Akita started utilising samples of animal sounds in various releases starting with 'Frog'. Around 2002, Akita became a vegan. Also in 2002, Akita released 'Merzbeat', which was seen as a significant departure from his trademark abstract style in that it contains beat-oriented pieces.
In 2009, Akita reintroduced the drum kit, his first instrument. This could be heard on '13 Japanese Birds', a thirteen disc series recorded and released one-a-month throughout 2009. At this time he changed the name of his home studio to Munemihouse.
Beginning in November 2009, Masami Akita started releasing archival material from the 1980s and 1990s, both reissues and previously unreleased material, several of which were released on cassette. Merzbow has also released several archival boxes; 'Merzbient', 'Merzphysics', 'Merzmorphosis', 'Lowest Music & Arts 1980–1983' and 'Duo'.
Merzbow has released more than 300 Records & CDs.
Merzbow also work collaboration with different kind of artist such
as Balazs Pandi, Mats Gustafsson, Thurston Moore, Boris, Keiji Haino,
Richard Pinhas, Duenn, Nyantra, Jim O'Rourke, Lawrence English, X
iu Xiu, Gezan etc.
Official Site:
merzbow.net

Opening Performance Orchestra is a seven-member ensemble encompassing a wide genre span - from the 20th-century electronic thrusts of the musical avant-garde as far as contemporary Japanese
noise music. Its own creations are based on fraction music, with the
initial sound being digitally destroyed, fractured, and uncompromisingly
rid of all its original attributes within the spirit of the credo “no melodies -
no rhythms - no harmonies”. The results are original compositions
(such as Spring Ceremony or Fraction Music, Evenfall, Creeping Waves)
as well as reinterpretations of other composers' pieces that the ensemble feels to be in the same vein - cases in point being Inspirium
Primum, referring to the material by Hiroshi Hasegawa, a Japanese
noise music representative; Re:Broken Music, based on the destroyed
music of the Czech Fluxus artist Milan Kní_ák; Chess Show, a distinctive
John Cage reminiscence; Perceived Horizons, a tribute to musique
concrète; The Noise of Art and Futurist Soirée, originating from the
ideas and texts of the Italian Futurists and bringing to bear authentic instruments known as intonarumori.
During of its existence, Opening Performance Orchestra has given
a number of concerts, for example, at MaerzMusic, a contemporary
music festival in Berlin (2014, BROKEN REBROKEN); at the New
Music Exposition international festival in Brno (2014, BROKEN
REBROKEN); at the Minimarathon of electronic music held as a part
of the Days of Ostrava festival of contemporary music (2013, The
Noise Of Art); at the NEXT festival of progressive music in Bratislava
(2014, Fraction Music VII); at the Prague Industrial Festival (2006,
Fraction Music and 2008, ASTROPO); at the Wroclaw Industrial
Festival (2007, Fraction Music II); at several previews of the Czech
Concretists' Club, including a retrospective at Topi__v salon in
Prague (2015, The Contours of Sounds); at the opening of the
Membra Disjecta for John Cage exhibition at the DOX gallery in
Prague (2012, Chess Show); at the National Gallery in Prague
during the Art's Birthday party given by Czech Radio (2016, Futurist
Soirée); and at Ostrava Days, in co-operation with Reinhold Friedl
(2017, Chess Show). Since 2010, Opening Performance Orchestra
has regularly organised NOISE ZONE, an open audio-visual project
mapping the noise scene, which has hosted, among others, Hiroshi
Hasegawa, Astro, Merzbow, Schloss Tegal, Einleitungszeit, Birds Build
Nests Underground, Instinct Primal, Magadan, Napalmed and others.
Since 2006, Opening Performance Orchestra has released CDs, mostly
as self-publishers, but also with the Belgian label Sub Rosa (BROKEN REBROKEN, together with Milan Kní_ák, October 2015) and the
German label Psych KG (Fraction Elements, together with Hiroshi
Hasegawa, August 2016). At the beginning of 2016, Opening
Performance Orchestra recorded the composition Futurist Soirée,
commissioned by Czech Radio, which was performed within the EBU international exchange network in November 2016. Futurist Soirée,
for three intonarumori and two narrators, could be heard in June
2017 at the opening of an exhibition at the Museum of Art in _ód_,
dedicated to Enrico Prampolini and Polish avant-garde theatre.
Official Site:
www.o-p-o.cz

Bandcamp Daily  your guide to the world of Bandcamp

Guests include Kassa Overall and Muriel Grossman, plus an LP of the week by Van Hunt.